Esther and Scott met on a night out with friends seven years ago. With Scott being the cheeky guy he is, he kept stealing Esther’s seat, who know this would ultimately lead to Scott stealing Esther’s heart. The proposal came a year after, Scott popped the question at a family dinner beside the lake, five years later, on 24thFebruary 2019 they became husband and wife at Castaways Resort in Waiuku.

Esther wore the Della by Maggie Sottero, “I originally had looked on the Astra Bridal website and found a dress which I loved. When I had my consult, I didn’t like it at all. I wanted a dress that didn’t show off my stomach that much. It was more about finding a dress for my figure and the gown I eventually had cuddled me in all the right places and I just kind of knew once it was on me that it was THE dress. I felt like a princess in it.”

Their day was amazing, being a family focused wedding they had family members lending a helping hand anywhere possible. Everyone came together as one to make it the magic day Esther and Scott had dreamt of.

Congratulations to this lovely couple! 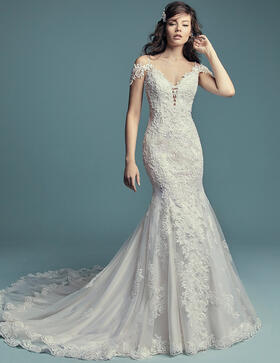