Tash and Craig got married at the breath-taking Castaways Resort, at Karioitahi. The two met through mutual connections of Craig’s sister and cousin. Fast forward to 4 years later after many adventures, holidays and buying a house, then came the proposal sneakily disguised as a birthday present so Tash could show it off to her friends later that night during dinner.

Tash wore the Prestyn by Sottero & Midgley, “I had 2 fittings at Astra on the North Shore with Leti and I must have tried on at least 15 gowns between those 2 fittings - all of them were missing something. I was looking for something elegant, timeless and with no lace or tulle. Leti comes out with 2 more gowns - one that was ok but the other was exactly what I wanted - ivory satin, full princess skirt, fitted bodice - no frills, no lace, no beading - simply elegant with enough of a train to be a little bit dramatic! I tried it on and stayed in it for about half an hour running around the store! Without those girls in the store being so patient and understanding of the process I wouldn't have found my dream gown”.

Their day was what dreams are made of, of course there were some hiccups, but these only made their day even more perfect. The ceremony was full of love and laugher, which was carried through to the reception. In Tash’s eyes it was really worth all of the planning, and time that they put into it, however the only change they would make is to have a two-day event rather than just the one! 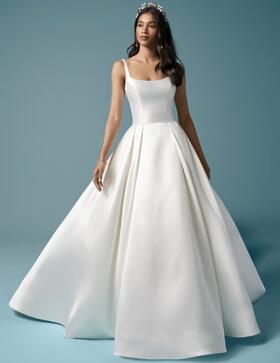 On Point Beauty by Selina